The SenSmartTM Universal Oximeter cerebral and somatic oximetry graphs shown in Figure 1 demonstrates a case in which monitoring rSO2 provided reliable data that perfusion was sufficient to avoid the use of packed red blood cells (PRBCs). 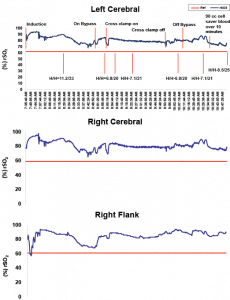 What the SenSmartTM System Showed

The patient underwent uneventful induction with Sevoflurane, with maintenance anesthesia also provided by Sevoflurane, as well as fentanyl and dexmedetomidine. Cooling was to 28.4° Celsius. As noted above, the goal was to perform the surgery without transfused blood products; therefore, the patient received pure crystalloid prime at the commencement of cardiopulmonary bypass (CPB), primarily with PlasmaLyte. The first arterial blood gas (ABG) was obtained roughly ten minutes after the commencement of CPB, revealing a hemoglobin of 6.8 gm/dL and hematocrit of 20%. Serial ABGs during CPB revealed the hemoglobin and hematocrit were maintained at this level. The patient was hemoconcentrated while on CPB, the last Hg/Hct (H/H) prior to separation from CPB was at 6.8/20.

After separating from CPB, blood was salvaged from the field and CPB pump with a Cell Saver and we were able to transfuse the patient 90 cc of this cell saver blood. Her H/H after this transfusion of her salvaged blood was 8.5/25.

The nadir for the NIRS values were R-78, L-76 and renal-69 immediately following commencement of CPB, which is completely expected. For the remainder of the CPB run the cerebral rSO2 values remained in the low to mid 80s and the somatic renal rSO2 also remained in this range.

Determinants of tissue oxygenation are oxygen delivery, comprised of cardiac output, arterial oxygen saturation, and hemoglobin, and tissue oxygen extraction. The brain’s relatively high degree of oxygen extraction relative to other organs implies that it is especially at risk during periods of marginal or inadequate oxygen delivery. Thus, cerebral oxygenation can be an especially sensitive indicator of oxygen delivery, i.e., marginal oxygen delivery may result in a diminished cerebral regional saturation index (rSO2), while not affecting the somatic rSO2 until further declines in oxygen delivery occur. That said, Near-Infrared Spectroscopy (NIRS) monitoring is now commonly used to assess regional perfusion to multiple tissue beds.1,2,3 It has also been published that the use of NIRS identifies vulnerable periods during cardiac surgery and that NIRS induced interventions can improve neurological outcomes.4,5 Studies have also shown a statistically significant increase in cerebral rSO2 and somatic rSO2 after transfusion with PRBC.6

This case demonstrated that, despite the low H/H, there was adequate cerebral and somatic perfusion throughout and following the CPB run. Without the SenSmart monitor, this patient would likely have been transfused at least one unit of packed red blood cells (PRBC). Utilizing SenSmart, transfusion was confidently withheld, knowing the brain and body were receiving adequate levels of oxygen in real time, despite the severe surgically-induced anemia.