Synopsis: Light attenuation properties of brain tissue change with age and can impact near-infrared spectroscopy (NIRS) cerebral oximetry systems. Use of 1) multiple sensors for different age groups, and 2) incorporation of age into the algorithm have both been used previously in an attempt to minimize the impact of this effect. In contrast, the EQUANOX™ Advance Oximetry System with the 8004CB sensor incorporates Nonin’s proprietary, patent-pending Dynamic Compensation™ algorithm to account for the variability in light absorption-scattering characteristics of a child’s developing brain tissue. This methodology allows for adjustment based on each patient’s developmental status rather than relying on an age-based or broad-group estimate.

OPTICAL PROPERTIES OF THE DEVELOPING BRAIN

Neurologic complications due to cerebral hypoxia-ischemia can be common in children with congenital heart disease (CHD) or pre-mature infants. The use of conventional cerebral oximetry to assess oxygenation status of the brain is becoming standard of care in certain types of pediatric and neonatal surgical operations and critical care environments to minimize potential complications. However, the accuracy of NIRS cerebral oximetry in the developing brain can be degraded due to the heterogeneity of these patient populations.

Advancements in brain imaging technology, specifically magnetic resonance imaging (MRI), have expanded the knowledge of brain development in humans over the past decades. Today, it is well known that there are significant brain development and associated tissue changes in the first few years of life. Key anatomical changes within the brain of the child during this time include myelination of neurons, and the proliferation and organization of synapses.1 These brain development processes vary greatly across individuals. This is especially true in the patients most commonly monitored with NIRS technologies, including CHD and premature babies, as their brains may not be the same as other children in their age-cohort.

As the human brain develops, the interaction between the tissue of the cerebral cortex and NIRS is impacted, including changes in light path lengths and light absorption-scattering characteristics.2 In a study of 86 patients, neonate through 12 years old, we found that NIRS light attenuation of the cerebral tissue increased by approximately a factor of ten across that age range.3 (Figure 1) Although the light attenuation in a child’s brain gradually changes with age, these changes do not occur as discrete steps at specific ages. When faced with a population of subjects with such varying NIRS light absorption and scattering characteristics, providing an accurate NIRS tissue oximetry measure with one fixed algorithm can create a technologically challenging situation and is not properly served by generic assumptions. 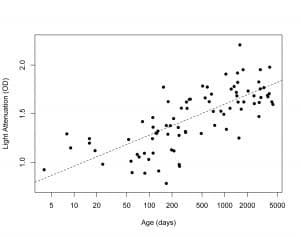 Some cerebral oximetry devices have opted to use age or patient size (weight) to refine their algorithms. This has been approached by either developing sensors which can only be used on a limited patient range (CAS Medical, Covidien) or requiring the patient’s age and weight to be entered into the system manually by a user so that these values can then be incorporated into the algorithm (CAS Medical).

CHD and neonatal patients are often not well suited to age- or weight-based norms due to associated neurologic development retardation caused by the underlying disease states. Thus, a system that relies on age and/or weight as a proxy may not truly represent the brain developmental status of an individual subject. The optimal solution is to use a direct measure of light attenuation that takes into account the specific brain development of the patient.

Nonin’s Dynamic Compensation is a real-time smart algorithm that incorporates information from the tissue being interrogated into the measurement estimate. With Dynamic Compensation, the system directly evaluates the light attenuation of the targeted tissue and adapts the rSO2 calculation to the light path properties of the patient’s brain tissue. A single sensor can provide an accurate measure of rSO2 in neonates, infants and pediatric patients. No patient demographic information is required; rather the direct information from the tissue is used to adjust the algorithm.

In order to incorporate the effect of the targeted cerebral tissue into the algorithm, one must first effectively isolate the targeted tissue. Thus, a key to being able to employ the Dynamic Compensation algorithm is to minimize external interfering signals (such as ambient light and electromagnetic interference) and shallow tissue (bone, scalp) contamination.

Nonin’s extensive NIRS signal processing experience provided the foundation for technology that meets the requirement of effectively isolating the targeted tissue. Extensive electromagnetic shielding is incorporated into the sensor face and cabling to minimize interference. Real-time iterative algorithms assess and remove ambient light interference. The iterative nature of the ambient light processing allows for effective exclusion of interference even in the face of changing ambient light conditions which may occur during a move from an operating room to a medical ward, for example. Together these two design elements of the EQUANOX sensor and signal processing limit the noise and interference from external sources.

Additionally, the patented dual emitter/dual detector sensor architecture of the EQUANOX has been shown to more effectively isolate the deep tissue from the shallow tissue (scalp and bone).4 Inclusion of a second emitter in the sensor topography provides for multiple measurements to each detector site, and thus the ability to compensate for underlying differences that may exist in the shallow tissue under the detector sites.

Thus, there are three primary components that contribute to the ability of EQUANOX technology to effectively isolate and assess the light attenuation of the cerebral cortex: sophisticated signal processing, internal sensor design elements, and sensor emitter/ detector design. Once this attenuation information is assessed, it is incorporated into the light processing algorithms to provide accurate tissue saturation values across a diverse patient population.

In a study of 86 patients, the EQUANOX Advance 8004CB Series sensor, supported by the Dynamic Compensation algorithm, was shown to be accurate in neonate, infant and pediatric patients using a single sensor and calibration algorithm.5 Accuracy, as assessed by root mean square (Arms), was shown to be 5.3% across a range of saturation values from 25% to 90%. This data validates the performance of Dynamic Compensation algorithm in a diverse pediatric patient population, representative of the typical patient in which such technology would be used. The image in Figure 2 illustrates the three different age subgroups.6

Nonin’s 8004CB Series sensor and Dynamic Compensation algorithm represent a major step forward in both technological advancement and patient-specific accuracy. The Nonin EQUANOX Advance System with 8004CB Series sensors offer improved clinical utility through one sensor that can provide accurate values across a range of subjects, while not requiring manual entry of patient demographics.