Summary of presentation as presented by Renee N. Kreeger, MD, at the Society of Thoracic Surgeons meeting in Ft. Lauderdale, Florida, January 30, 2012.

Cerebral hypoxia-ischemia remains a not infrequent complication in children with congenital heart disease (CHD) before, during and after cardiothoracic interventions. Near-infrared spectroscopy (NIRS), a non-invasive optical technology, can be utilized at the bedside to monitor brain oxygenation and detect hypoxiaischemia. The purpose of this multi-center study was to calibrate and validate a novel NIRS device for CHD.

The study sensor, EQUANOX™ Advance™ 8004CB sensor (adhesive and non-adhesive), utilizes a dual-emitter/dual-detector sensor architecture which has been shown to more effectively eliminate signal contamination due to surface and shallow tissue variability to better isolate the targeted tissue bed.1 Spacing between the emitter/detector components is 12.5 mm, thus the distance from each emitter to the nearest detector is 12.5 mm and the distance from each emitter to the farther detector is 25.0 mm. (FIGURE 1). Rather than require multiple sensors or including age into the algorithm, EQUANOX Advance 8004CB incorporates Nonin’s proprietary Dynamic Compensation algorithm to account for the variability in light absorption characteristics of the developing brain tissue of the child. This methodology allows for adjustment based on each individual subject’s development rather than relying on an age-based algorithm representing an excessively broad-ranged group.

After parental consent and IRB approval, 100 children aged <12 years and <40 kg with CHD undergoing cardiac catheterization were enrolled into a two phase study. In Phase I (calibration phase), arterial and jugular bulb venous blood were obtained for co-oximetry simultaneously with NIRS signals to calibrate an algorithm for NIRS regional cerebral saturtion (rScO2) to a weighted average cerebral saturation (SavO2= 0.7 SjO2 + 0.3 SaO2). In Phase II, (validation phase), arterial and jugular bulb venous samples to calculate SavO2 were compared with NIRS rScO2 from the device algorithm. Correlation, bias, precision, and Arms between SavO2 and rScO2 were determined by linear regression and Bland-Altman analysis. 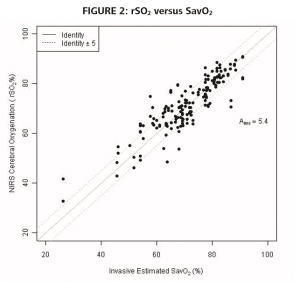 The Nonin EQUANOX Regional Oximeter System with EQUANOX Advance 8004CB sensor accurately measures the absolute value of cerebral saturation in children over a wide range of oxygenation levels, and may offer advantages in the detection of tissue hypoxia-ischemia in CHD over other devices.