An independent laboratory test comparing Nonin Medical’s 8000AA Reusable Finger Clip Pulse Oximetry Sensor with three competitive finger clip pulse oximeter sensors (labeled and promoted as “Nonin Compatible”) was performed in order to compare aspects of durability. The tested brands included Nonin Medical, Envitec, Unimed, and Cables & Sensors. Specifically, the test sought to quantify and compare the maximum amount of force which can be applied to the sensor-end of the SpO2 finger clip sensors before signal transmission from the sensor to the oximeter failed.

As Figure 1 shows, the Nonin 8000AA sensor displayed the greatest durability among the sensors tested. Even more significantly, the structural integrity of the Nonin sensor was never compromised until the sensor reached its average failure point of 50.2 lbs of force. In comparison, other sensor brands became structurally compromised and permanently weakened at less than half of the strength of force exerted on the Nonin sensor before signal transmission failure. 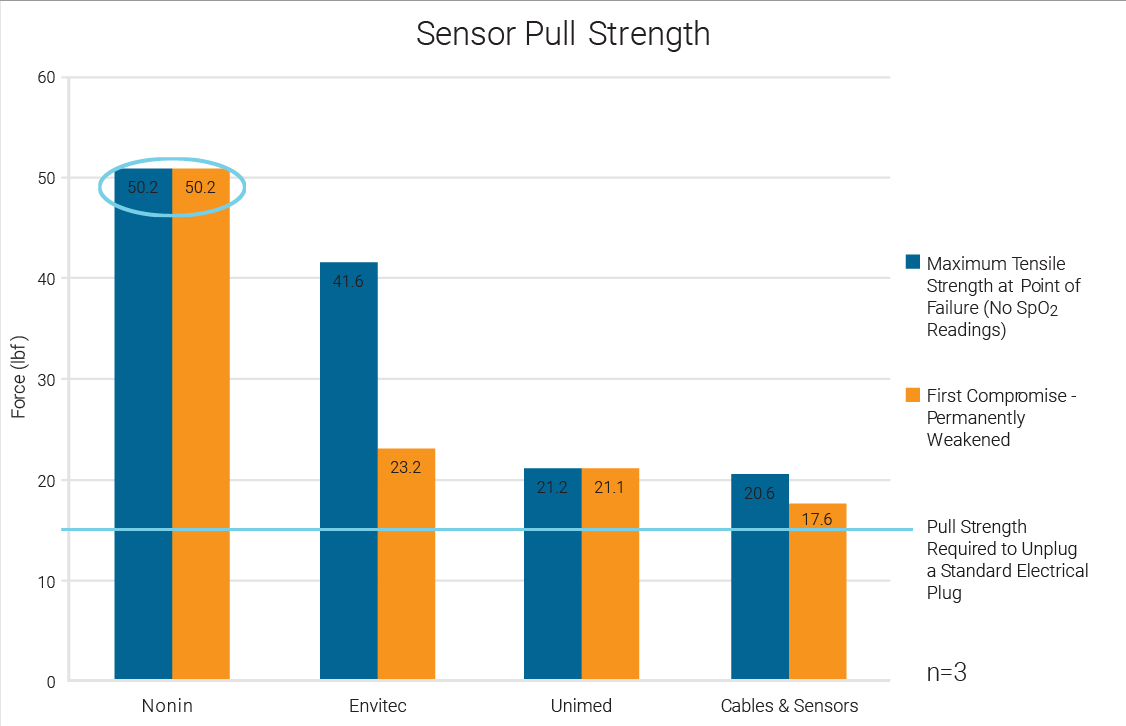 Four brands of pulse oximeter clip sensors underwent a mechanical pull test at The Specialty Lab, Inc. in Minneapolis, Minnesota. Using a mechanical pull fixture, gradual force was applied to the sensors’ cables. The objective of this testing was to measure the tensile force on the sensor cable until the point where pulse oximeter signal transmission failure occurred, as verified by loss of reading on the pulse oximeter monitor. Testing was performed on three samples from four different manufacturers.

The testing session began by connecting each manufacturer’s sensor to the Nonin Model 7500 pulse oximeter. A finger simulator was then inserted into the sensor to verify functionality. Next, the sensor was inserted into the bottom restraint fixture of the mechanical pull tester and the cable was secured to a cable restraint fixture. For testing consistency, the same amount of cable length was left between each restraint fixture at the beginning of each test. The gauge was then zeroed out while no tension was applied to the sensor. Finally, the mechanical pull tester was started, pulling at a rate of 2.0 in/min. The pull test was halted the instant readings were lost on the oximeter monitor. The maximum tension was recorded, and a plot of load versus displacement was generated for the report. The entire procedure was repeated for an additional two samples of each brand under test.

As Figure 2 shows, the Nonin Medical 8000AA Pulse Oximetry Sensor endured the most amount of force and continued to perform with over 50 lbs of force applied. Other sensors that were tested in this session market and label themselves as “Nonin Compatible.” When tested with Nonin oximeters, competitive sensor performance was compromised well before the point of complete breakage and failure.

FIGURE 2. Test results showed the Nonin sensor was the most durable over Envitec, Unimed, and Cables & Sensors brands.

Sensor replacement is often the most significant expense in the cost of ownership of pulse oximetry patient monitoring. Sensors must be able to withstand the rigors of a fast-paced healthcare environment. They get pulled, caught, dropped and damaged on a regular basis. In addition, testing shows that sensors start to break even though damage to them may not be readily visible. The shortened lifespan due to compromise and breakage leads to increased sensor replacement costs.

The key to Nonin sensor durability is the sensor’s unique cable anchor design feature (Figure 3). Using the same material found in bullet-proof vests, Nonin’s cable fiber is anchored at both ends of the sensor and provides a strong, stretch-resistant construction that protects the cable’s conductor wires from pulling forces.

Accuracy, safety and durability depend on complete system performance. Mixing Nonin oximeters with other manufacturers’ sensors could compromise performance and patient safety. Beware of sensors claiming to be compatible with Nonin pulse oximeters; order sensors only from an authorized Nonin Medical dealer.
ISO Standards 80601-2-61:2011 for pulse oximetry state that “pulse oximeter probes and probe cable extenders are as important in establishing the safety and accuracy of the complete pulse oximeter equipment as is the pulse oximeter monitor itself.” Nonin Medical is fully compliant in meeting this international quality standard.

Handheld pulse oximeters are portable and versatile, ideal for use in ...