Published on July 11, 2012; Reposted with Permission from RT Magazine 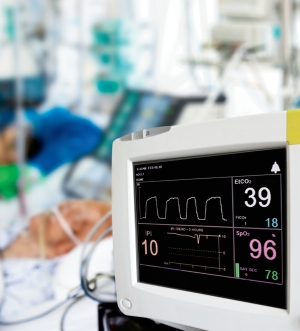 In a study by Overdyk et al,3 178 postsurgical patients receiving morphine or meperidine patient-controlled analgesia (PCA) were monitored with continuous oximetry and capnography; 12% of them had episodes of desaturation (SpO2 <90%), and 41% experienced bradypnea (respiratory rate <10) lasting 3 minutes or more. This incidence of respiratory depression by bradypnea is significantly higher than the 1% to 2% incidence commonly cited in the literature.

In 2011, the Anesthesia Patient Safety Foundation (APSF) held a special meeting to address “Essential Monitoring Strategies to Detect Clinically Significant Drug-Induced Respiratory Depression.”4 According to APSF, clinically significant drug-induced respiratory depression in the postoperative period is a “serious patient safety risk that continues to be associated with significant morbidity and mortality.” Among the conclusions and recommendations, it was recognized that while future development may improve the ability to monitor oxygenation and ventilation in the postoperative period, maintaining the status quo while awaiting newer technology is not acceptable. The foundation states, “Intermittent ‘spot checks’ of oxygenation (pulse oximetry) and ventilation (nursing assessment) are not adequate for reliably recognizing clinically significant drug-induced respiratory depression in the postoperative period.”4

Specific to monitoring ventilation, APSF recommended: “Continuous electronic monitoring of oxygenation and ventilation should be available and considered for all patients and would reduce the likelihood of unrecognized clinically significant opioid-induced depression of ventilation in the postoperative period.” It goes on to state, “Capnography or other monitoring modalities that measure the adequacy of ventilation and airflow is indicated when supplemental oxygen is needed to maintain acceptable oxygen saturations.” The APSF also made the observation that “APSF is aware of hospital system experiences that support the effectiveness of alternative continuous respiratory monitoring technologies, such as capnography, in lieu of pulse oximetry.”5

One such institution, St. Joseph’s/Candler Health System, a 644-bed tertiary care “magnet” hospital system in Savannah, Ga, in 2004 replaced its existing IV pumps with “smart” IV safety systems, including pulse oximetry and noninvasive capnography modules.5-7 These purchases were based on the recognition that patient response to opioid administration is highly variable, even with recommended dosages, and it is important that all patients receiving PCA therapy be monitored for opioid-related complications. The new system resulted in financial benefits, improved safety, improved quality of care, and increased nursing satisfaction. Over a 5-year period, implementation of these smart systems reduced high-risk medication errors and PCA-related undesired outcomes, helped avert at least 471 preventable adverse drug events (ADEs), and saved money. Feedback from the nursing staff indicates that nurses feel more able to aggressively manage patients’ pain now that they have insight into the patient’s respiratory response to PCA and can ensure “right programming, right response.” 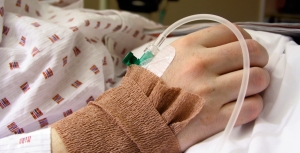 Often, the respiratory care (RC) department becomes involved with PCA patients when things go bad, often during a “rapid response” or even a “code blue.” A number of papers presented at the 2011 American Association for Respiratory Care (AARC) Congress demonstrated that more RC departments are getting proactive by monitoring patients with capnography directed at preventing adverse events. Pohlenz et al revealed a 40% reduction in reversal of PCA narcotics and a 100% reduction in transfers to higher level of care for respiratory suppression after implementing capnography for PCA patients in a Grand Island, Neb, hospital.8

Weber stated that after a patient death from oversedation, a program including EtcO2 monitoring was implemented at a Green Bay, Wis, hospital. Since implementing the program, the hospital reported a reduction in naloxone (Narcan) reversals and more than 600 days without a serious safety respiratory event.10

In all three facilities, the RC department was heavily involved in development, implementation, and monitoring of the program. The same is true at St Joseph’s/Candler.7 Respiratory therapists are a part of the multidisciplinary team for PCA medication safety. Hospital PCA policy was revised to require that respiratory therapists conduct rounds for every PCA patient at least once per 12-hour shift, reviewing capnography trend data. In response to alarms, the nurse will arouse and stimulate the patient and contact respiratory therapy. The respiratory therapist and the nurse decide the best course of action, which might include ordering arterial blood gas measurements, administering supplemental oxygen, or treatment with positive pressure (eg, CPAP, Bilevel) if capnography waveforms indicate upper-respiratory obstruction associated with OSA.

Many hospitals continue to use manual methods of monitoring, periodically visually counting a respiratory rate (RR) and performing oximetry spot checks. Manual monitoring requires many staff members, a difficult proposition in today’s health care facilities, which are facing staff shortages and budget cuts. The duties of health care providers have steadily expanded, and the amount of time actually spent per patient has been reduced. For example, a study of medical-surgical nurses in 36 hospitals showed that they spend only 7% of their time on patient assessment and reading vital signs.11

Even if staffing ratios were not an issue, simple observation may not be sensitive enough to detect early signs of physiologic compromise. Using capnography and impedance, a study of patients undergoing monitored anesthesia care (MAC) found that 26% of subjects experienced apnea of at least 20 seconds that went unidentified by the anesthesia providers.12Lightdale et al found that endoscopy staff using observation documented poor ventilation in 3% of all procedures and no apnea. Capnography indicated alveolar hypoventilation during 56% of procedures and apnea during 24%.13This demonstrates that even in an ideal one-to-one patient care setting, experienced providers do not reliably detect a significant respiratory event, such as apnea.

Electronic monitors have the advantage of being continuous, are able to monitor all patients simultaneously, and, while not intended to replace nursing vigilance, allow the nurses to focus more time on those patients who have greater need. Latest generation monitoring platforms allow connection to a central monitoring station, and alarm information can be forwarded to nursing’s cell phones or pagers. One PCA system is integrated with capnography and will pause opioid dosing when the RR is below a set limit.14

As a rapid, safe, and easy method to measure oxygenation, pulse oximetry has for a quarter of a century been the standard of care for monitoring during anesthesia. However, its use as a surrogate monitor for detecting hypoventilation is limited to patients breathing room air.4 Those breathing an FiO2 of as little as 0.25 (1 LPM via nasal cannula) could be at risk for extreme hypercarbia and carbon dioxide narcosis from inadequate breathing before their arterial hemoglobin oxygen saturation falls below 90%.15

Unfortunately, for a patient receiving supplemental oxygen, as is common perioperatively, the pulse oximeter may detect a deceptively adequate level of arterial oxygen when the patient’s breathing is actually quite depressed. The pulse oximetry technology does not detect important early indicators of respiratory depression, such as changes in RR, hypoventilation, pauses in breathing, or exhaled carbon dioxide levels; nor may it recognize declining ventilation in patients on supplemental oxygen until slow breathing progresses to no breathing (apnea).

Alternative ventilation monitoring methods have their own advantages and disadvantages. Methods that rely on counting RR through changes in chest wall impedance have problems with false positives or failure to achieve an adequate signal to analyze. Other methods analyze breathing sounds through an acoustic sensor applied to the neck, but even with compensation for nonrespiratory sounds, RR alone cannot measure the adequacy of ventilation. Clinical organization guidelines and studies are quick to recognize that RR alone is inadequate as severe respiratory depression may develop in the presence of a normal RR.16-19 Vila et al noted, “In our study, we did not observe a predictable decrease in respiratory rate before opioid-induced respiratory arrest.”20

Capnography, or end-tidal CO2, is supported by the American Society of Anesthesiologists as more likely to detect hypercapnia/hypercarbia and respiratory depression than are clinical signs, such as respiratory rate, alone.15 The Institute for Safe Medication Practices (ISMP) reminds us, “Do not rely on pulse oximetry readings alone to detect opiate toxicity. Use capnography to detect respiratory changes caused by opiates, especially for patients who are at high risk (eg, patients with sleep apnea, obese patients). … Establish guidelines for appropriate monitoring of patients who are receiving opiates, including frequent assessment of the quality of respirations (not just respiratory rate) and specific signs of oversedation.”17

Multiple studies have shown that Etco2 provides information about patient ventilation issues before other monitoring modalities traditionally used during anesthesia, such as pulse oximetry and visual monitoring.5,12 One study, terminated due to concerns of the Institutional Review Board about blinding the Etco2 data, suggested the information collected can be used to intervene earlier and prevent postoperative respiratory failure, making it a powerful cost-effective tool in improving outcomes and reducing cost.21

Recently, the Veterans Health Administration (VHA) performed a root-cause analysis on infusion-device incidents within the VHA. In its analysis, 129 incidents were associated with two types of infusion pumps—60 on general purpose pumps and 69 on PCA pumps. Based on these root-cause analyses, published literature, and device evaluations, the VHA’s integrated product team recommended that “PCA pumps with an integrated end-tidal CO2monitor is the pump of choice, because use of this technology could have prevented more than 60 percent of adverse events related to PCA pumps in VHA.”23

When St. Joseph’s/Candler started their monitoring program, clinicians there fully intended to monitor everyone with oximetry and selective patients with capnography. Based on the results of their clinical evaluation, the final decision was the reverse. Capnography is now required for all patients receiving PCA, not only those at heightened risk of toxicity. Pulse oximetry is used selectively for patients at high risk of oxygenation problems.7 Ray Maddox, PharmD, director of clinical pharmacy, research, and pulmonary medicine, states, “We’ve found that capnography is superior to continuous pulse oximetry. It’s not infrequent that surgeons will order low-flow oxygen therapy in postoperative patients, and that can obscure real oxygenation for a pulse oximeter and cannot really be that helpful for depression in respiratory rate and exhaling of CO2. So we just believe, on the basis of our experience, that when you have the capability to do continuous monitoring and you have the capability to make a selection between two technologies, capnography is the better of those two” (personal communication).

In reviewing their results, Maddox goes on to state, “What we’ve done over a 5-year period of time is to calculate the return on investment and internal rate of return of what we spent on the technology versus what we know that technology has prevented from happening; that is, those captured intervened medication-related events. And over the 5-year course of time, we’ve had an internal rate of return of about 83% with a cost avoidance or cost savings of $1.8 million over and above the cost of the technology.7 More than that, I know, because of what has not happened during those 5 years, and now 6 years, that [since] we’ve been using this technology we’ve not only saved money, we’ve saved lives. That is a deep level of belief [held] not only [by] me but [by] our administration.”

Blood oxygen saturation levels show how much oxygen is being carried b...

What Is Your Normal Oxygen Level

A recent study has raised some questions about differences in pulse ox...