What would it be like to have wings? To fly freely over open land, or along a mountain range; a group of talented Hang Gliders from Europe get a dose of the magic with their mission to break world records in Namibia. Although it’s majestic, flying isn’t as effortless as it looks; the pilots can soar in high altitudes for six to eight hours at a time. This can pose a threat to their neurological state, as being in those high altitudes for an extended period of time reduces their oxygen intake. In the past, the pilots would get headaches or become unconscious and not be able to fly the next day; they needed a reliable oximetry solution.

Hang Gliding is a hobby that depends heavily on weather; a dry environment is optimal due to the amount of thermals present. A thermal is created when the sun heats the ground resulting in warm air. The hang glider catches a thermal, one after another in attempts to fly a great distance, up to 186 miles!

Due to this great distance, the pilots can fly in high altitudes (up to two and a half miles high) for six to eight hours at a time which can make one feel euphoric. The effect is enhanced by the strong winds relentlessly hitting the pilots face because they wear only a helmet. They have to be very mindful of their oxygen intake in order to avoid unconsciousness.

In the words of Dr. Eckhart Schröter, Sports Medicine, Orthopedic Surgeon and pilot for 26 years; “People feel happy, everything is very cool but in the end it’s not.” The longer one stays in this state of low oxygen, the greater chance they have at facing brain damage and other neurological complications.

Pilots were not able to take much with them since their flying instruments are open facing, but tracking their oxygen levels whilst flying was a MUST and they needed something that could withstand the winds and cold temperatures of those high altitudes. 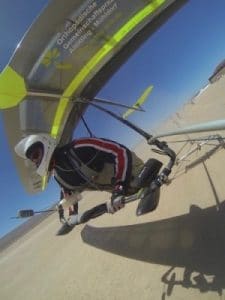 Enter Nonin’s WristOx 3150 which they donned in the air as they flew in attempts to break world records. They were able to fit Nonin’s soft sensor on their pinky finger underneath thick gloves, and view their oxygen levels via the interface on the WristOx device. They were thrilled at the durability and performance of this oximeter. The WristOx worked quite well for the group and they were able to pursue their mission safely with confidence.

United with an oximeter they could trust, the pilots began their adventure. As soon as the pilot was airborne, the chase commenced and a car took off in the pre-determined direction that the pilot would travel. The goal was always to meet in the chosen location at the end of the trip so the car could bring the pilot and his wings back to base. The triangle method is the desired way to go about a run; this allows a pilot to land right back where he started leaving no need for a car chase in the desert.

Nonin devices are built for the toughest case and most demanding environments. No wind or rain can stop the WristOx from performing, nor can it stop these pilots from flying. 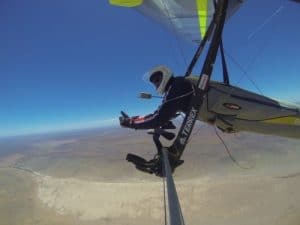 Imagine breathing through a straw for a day; it sounds difficult, does...

Oximetry You Can Trust: Even in the Most Extreme Environments

In the forthcoming installment of the Mission Impossible series, Missi...

To Hell and Back: Nonin Onyx® Fingertip a True Lifesaver for One Army Anesthesiologist

I deployed to Iraq for a year as the Chief of Anesthesia for the 772n...