The SenSmartTM Universal Oximeter cerebral and somatic oximetry graphs shown in Figure 1, demonstrate a case in which monitoring rSO2 provided reliable data that the IVC cannula had slipped out of position and that venous congestion was developing under the renal bed sensor.

It is common practice in cases of this type to place a venous return cannula in the inferior vena cava (IVC), and to place a ligature to snare the cannula in place. 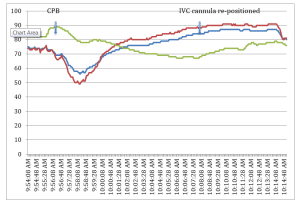 Operative Case and What the SenSmart System Showed

The patient underwent an uneventful induction with Sevoflurane®, and maintenance anesthesia provided by Sevoflurane, fentanyl and dexmedetomidine.

The case was uneventful prior to the initiation of cardiopulmonary bypass (CPB). On institution of CPB, all rSO2 values transiently decreased. It is normal for the rSO2 to decrease on initiation of CPB,1,2 and this decrease is more profound when a pure crystalloid prime is used.3 The nadir for the cerebral NIRS values were: right cerebral, 57% rSO2 and left cerebral, 51% rSO2, but they returned to above baseline within minutes. However, the renal bed rSO2 did not return, and continued to decline to a nadir of 67% rSO2 twelve minutes after the start of CPB.

This was brought to the surgeon’s attention and it was discovered that the inferior vena cava (IVC) cannula was not inserted into the IVC as intended, but was in the right atrium (RA). Moreover, the suture ligature, normally intended to snare the cannula in place, was closed around the IVC. The net result of this event was that the lower body blood return was completely impeded. Once the IVC cannula was properly positioned, the renal bed rSO2 returned to normal. (See Figure 1) The remainder of the case was uneventful.

It has been reported in the literature that cerebral ischemia caused by an obstructed superior vena cava (SVC) cannula can be detected by Near Infrared Spectroscopy (NIRS).4,5 This case represents an event where renal bed ischemia due to an IVC cannula obstruction was detected by NIRS. The SenSmart NIRS monitor alerted the clinicians to the obstructed IVC cannula soon after it occurred, allowing time for a simple and timely maneuver to relieve this obstruction, potentially preventing a hypoxic insult to the kidneys, liver or intestines. This perturbation was diagnosed fourteen minutes after the commencement of CPB. Without such early warning offered by the SenSmart NIRS monitor, the event may have resulted in morbidity.

As a clinical professional, you need to know when patient conditions c...